“Thank you for your support. Each and every one of you has helped make our winery a success.
We toast you!” – The Lawlor Family

Little did Robert and Joyce Lawlor know back in the early 1970’s what their passion for winemaking would bring.

1983
GALENA, ILLINOIS
The Lawlor family sees an opportunity to open a third winery in Galena, Illinois. They call upon Christine’s brother—Scott–and his wife, Karan, who had been working in Colorado and California, to move to Galena to help with the project.

1985
Scott, Christine, and their parents open the newly restored 1840’s granary building on Main Street in Galena.
The first production at the Galena facility was 5,000 gallons of wine.

1990
The family decides to focus production in Galena and closes the McGregor and LaCrosse locations.

As wine production continues, the Lawlors acquire a farm on North Ford Road just outside of Galena. They begin growing experimental grapes and move the wine production to the vineyard location.

2002
Christine Lawlor-White is honored as “Winemaker of the Year” by the Illinois Grape Growers and Vintners Association.

2008
Christine Lawlor-White is honored again as “Winemaker of the Year” by the Illinois Grape Growers and Vintners Association. 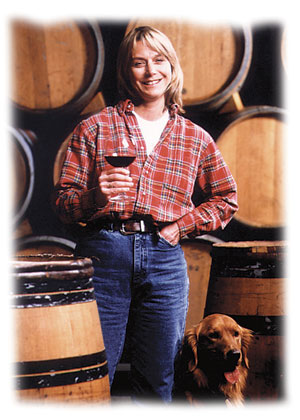 Honored twice as “Winemaker of the Year”—in 2002 and 2008–by the Illinois Grape Growers and Vintners Association, Lawlor-White received her formal degree in enology and viticulture from Fresno State University in 1975.

She—along with her family—own and operate the award-winning Galena Cellars Vineyard & Winery with a current production of more than 40 varieties and 60,000 gallons of wine annually.
The adage “The apple doesn’t fall far from the tree” holds true. Or perhaps in this case, there should be some adaptation to grapes and vines.

Her parents’ dream.
It started with parents who held a dream for building a family winery. The dream became reality when their daughter became an accomplished winemaker. And so the story begins.

Christine “Chris” Lawlor—was sparked by her parents and developed a passion for winemaking. So much so that after earning a teaching degree from St. Catherine’s College in St. Paul, Minnesota, she decided to move to California to attend Fresno State University and earn a second degree—this time in enology and viticulture.

The birth of Galena Cellars.
In 1976, Chris opened her first winery, Christina Wine Cellars, in McGregor, Iowa, beginning with a production of 500 gallons of cherry wine. Two years later, she moved to LaCrosse, Wisconsin, expanding her operations.

In 1985, she found her home in Galena, Illinois and opened Galena Cellars with her parents and brother Scott. Her production increased to 5,000 gallons of wine annually.

Growing in Northern Illinois.
Today, Chris is responsible for production of more than 60,000 gallons and 40 different varieties of wine. Over the past 25 years, Chris has been an active member and a champion in the viticulture community, leading seminars and working with the state viticulturist on the Galena Cellars Vineyard to experiment with growing Midwest hybrid grapes and educate others in the art and science of “winegrowing ” in Northern Illinois.

The next chapter.
Chris continues to share her spark with her children—Britt and Eric. Practically since the time they could walk, Chris’s children have been picking grapes, watching them being crushed, and working by her side in the laboratory.

In fact, two of the Galena Cellars wines are namesakes for her children—“Britt White” and “Eric the Red.”

Watch for the sequel.
It’s been some thirty years after initiating her parents’ dream. Now as a parent—and aunt—Chris shares her passion with the next generation of Lawlor family winemakers, currently earning their formal education in winemaking as well.

“Winemaking is one of those businesses that typically is a family business. It’s as if winemaking is in your blood! Each generation makes important contributions and the wine just gets better and better.”
~Christine Lawlor-White

Chris was honored to be voted the “2008 Illinois Winemaker of the Year” by the Illinois Grape Growers and Vintners Association.